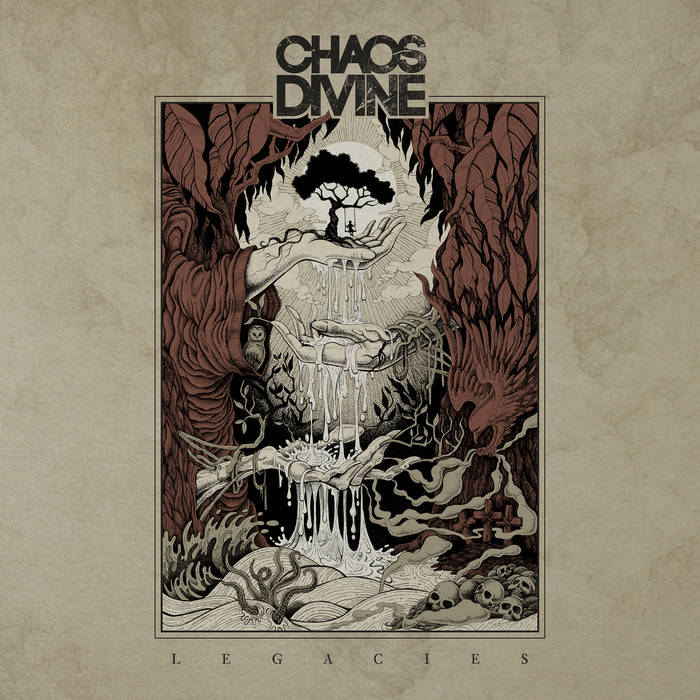 The concept of legacy has had increasingly more meaning for Chaos Divine as time has gone by. As one of the world's finest progressive acts, they have secured their own legacy over the course of 15 years, three iconic albums, countless stage hours and a trophy cabinet full of awards and industry accolades. Added to this, with band members recently entering into the world of parenthood for the first time, Legacies has not only emerged as the most fitting title for their gargantuan fourth album, but the theme that threads everything together.

From the dexterous opener Instincts, to the powerhouse finale of Into The Now, Legacies is a journey of exemplary musicianship and songwriting. Songs like Only Son, Colours Of War and the ambient title track affirm the album's concept, while singles False Flags and Unspoken each flaunt the band's staggering level of finesse. Their progressiveness has never come at the cost of their songwriting, nor have their penchants for brutality and melody ever been at odds with one another. True to this, Legacies finds Chaos Divine galvanising the crushing heaviness of their early work with the musicality and atmosphere of their 2015 masterpiece Colliding Skies.

As a working band, Chaos Divine have always done the hard yards required to bring their vision to life. From their music, to their artwork, to their stage show; the band has taken no shortcuts in striving for greatness. Since their inception they have pushed the envelope with a series of stunning releases that would define them. They forged their name as one of the must-see emerging heavy acts with their relentless debut Ratio (2006) and from there continued to progress exponentially. Defying expectations with three phenomenal albums back-to-back (and one hell of a cover of Toto's Africa) Chaos Divine's musical output has been nothing short of heavyweight.

Each Chaos Divine album has built upon the one that came before it. 2008's Avalon took the heaviness of Ratio to lofty new places. Its follow-up The Human Connection (2011) was the perfect bridge between sheer heaviness and the increasingly more progressive sound that would define Colliding Skies. Honouring this tradition, the band have raised the bar yet again with Legacies. Visceral and emotional, Legacies captures Chaos Divine at their absolute best – due in no small part to the skilled production team of Forrester Savell, Brody Simpson, Troy Nababan and Simon Mitchell.

The process of writing Legacies was very different than previous records. After the colossal undertaking that was Colliding Skies, the band took a well-earned break from creating. Eventually, new ideas began to surface during intensive group writing sessions, and members of the band worked on other songs more or less in solitude. As Legacies began to unfold, so too did its concept. Singer David Anderton explains, “Unlike our previous works, Legacies has a really strong theme throughout the album. Virtually every song in some way links back to the experience of parenthood and the innocence of children.”

Guitarist Simon Mitchell adds, “When it came time to record, the songs needed to be fleshed out, so the recording process ended up being significantly longer than had previously been the case.” Upon listening to Legacies though, it is instantly apparent that the extra effort has been worthwhile. Flawlessly performed and produced, it is the band's finest work to date.

As live performers, Chaos Divine ascended from the ranks of a 'local band' to that of a national and then international touring act – growing from a sought-after support into a towering headliner. They have earned coveted spots on festivals in Australia and Europe, have been met with chart positions, radio play, and a global following that is beyond loyal. Now, led by the soaring feature track Beacon, Chaos Divine return with Legacies in hand – their most ambitious, virtuosic album, and a testament to their own enduring legacy as Australia's most formidable progressive band.

Bandcamp Daily  your guide to the world of Bandcamp